This is a story of a remarkable journey that began in the corporate world in Poland, Europe. One young promising 9-to-5 worker decided to take to the freelance road of new opportunities, challenges, and discoveries that lead him to the other side of the world - literally, both professionally and personally. Just to get an idea of how incredible this story is, take the map and try to visualize the distance between Poland in Europe and Vietnam in Asia. Once a freelancer himself, Matt Laker took the leap of faith by launching Tribal Mastermind and a YouTube channel to help thriving businesses grow from anywhere in the world with remote teams and freelancers.

This is an inspirational story told by Matt himself:

The first website I ever sold was back in high-school in Poland. It was to a friend of my German school teacher, who was an author of books for kids. I charged her around a hundred dollars for that website. It felt like it's a lot of money for me back then. I continued with door-to-door website sales after I moved to the university town of Maastricht in the Netherlands. I did it not because I wanted to but mainly from the financial necessity. Nobody wanted to hire me in a town full of students, who were also hungry for work. On top of that, I didn't even speak the local language, so all job centers kept rejecting me. My side hustles didn't bring enough profits. At night I was writing economic papers for other students, in the early mornings I was walking around coffee shops and restaurants, handing out my CVs to win a job as a waiter. Around noon, I was usually trading used furniture between students and delivering sold items to their apartments. Carrying heavy items saved me money on gym membership.

In the afternoons I was walking along rainy and windy Dutch streets, knocking at doors and offering website development. Sometimes I was called out to "go back where I was from". I was extremely exhausted but I couldn't rest well at night because, in my $200-a-month dorm room, other students were partying (loudly). Not that I didn’t enjoy partying with them - quite the opposite. It was a relief. At a time, I had six dollars and fifty cents that I budgeted for my food every day. Luckily I found a cafeteria that served the $2 breakfasts (mainly croissants made out of bread and bacon).

It wasn't healthy at all, but it gave me enough carbs to burn while walking across the entire town. It was a really hard time to pretend that I am that big business owner in front of the prospects. It then became even more bizarre to seem like a business man at day when I got a job as a kitchen-hand at night. At that time I grew the business to the point where we had a team of sales reps across the entire country. It felt weird because the company grew, yet we were still not profitable. I grew it to manage more than 15 people across the Netherlands and still - had to grind as a kitchen hand to prevent our company from financial failure since they were not bringing any results and all worked on a trial basis.

At some point I decided to drop out from my faculty of economics because “international business school” taught me nothing about international business. At the same time me and my girlfriend broke up. As I lost any reason to stay in the Netherlands, I just went online and looked for budget airline flights out of that country. The cheapest flight I found was to Bucharest, the capital of Romania. At the time, I was into socializing a lot. I was going out all the time just so that I could talk to people. I didn't know why but I loved talking to people more than anything else. I could walk up to a stranger on a street and turn them into friends. As I was hanging out in some bar in Bucharest and I met two girls from Poland who told me about a job opening at Deutsche Telekom (also known as T- Mobile).

I started work as a recruiter, while still thinking about how to get my business back together. I was doing a great job but I didn't follow the corporate workflow.

I wasn’t exactly the most obeying employee. I didn’t follow the recruitment script accurately (yet I was recruiting the best people). I also took naps on the floor and other people found it odd. I don’t blame them. I just don’t fit into systems. I like building them.

A few years before, I somehow knew that universities and corporations would not fit me but back then I've never studied at university nor had I ever worked in a 9-to-5. That's why I purposefully started my study at the university and also started working for a corporation - so that I can get the experience and understand my “enemy” better.

As I spent countless nights getting my business back together - it slowly started working out. While at a lunch break at my office, I got my first online acquired customer through Fiverr at the rate of $75 per month. It was for building and maintaining a landing page. It was an awesome feeling because it opened up an opportunity for digital services sales for me. I thought it might be much more scalable than walking around and knocking doors.

I was still a recruiter and I was now grinding my side digital service business before and after my 9 to 5 job hours. It was extremely hard because I had to wake up much earlier than anybody else and go to sleep late to keep both things running. Sometimes I was so tired that I was sleeping on the floor in the toilet at our office (I had to hide there because they wouldn't let me sleep under my desk anymore). Every day after work I kept grinding until early in the morning. Then I got the second sale. That sale doubled the income from my salary!

This is when I decided to quit my job. I threw the towel on the floor and I knew that this is the best time to focus on my agency business.

I had enough savings to survive 3 months and my online agency proved to have a working system to generate clients already twice. I decided that if I can make a profit in the next month again, I will quit the job and fly away from Europe to somewhere warmer. At the time the snowy winter began approaching Romania. Gloomy mornings and dark afternoons started darkening my thoughts at this point. I was in a moment of extreme exhaustion, surrounded by bad weather.

As I completed another month in a row, making the same profit from my side business as from my regular 9-to-5 job, I decided to book a ticket and fly out to somewhere warmer. I looked at the map and Vietnam caught my attention. It was a mix of nostalgia (my ex was half vietnamese), a sense of inner revolt against the gloominess (I knew the weather there will be hot) and curiosity (I’ve never been there).

As I arrived my budget shrinked from an estimated 3 months to just 1 month as the Vietnam expat lifestyle turned out to be more expensive than European lifestyle. I thought I would just work harder. The boats has been burnt. I was grinding on my computer in my apartment and not really leaving it much. 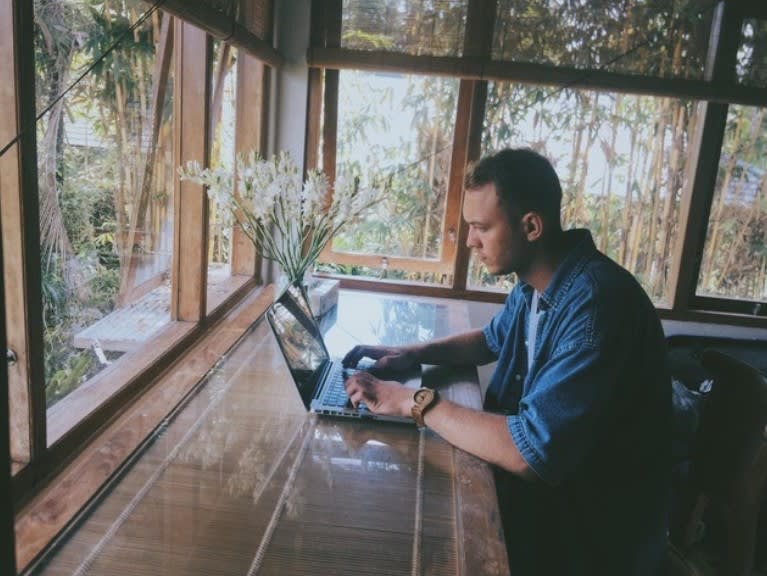 I did nothing but sent UpWork proposals and created Fiverr gigs over and over again. Then, I was waking up early in the morning to match the timezone of North American prospects. I literally did nothing but work.

I started hiring assistants who could help me send proposals to scale the lead generation. I also started hiring developers so we can serve more clients simultaneously. Then our digital service sales finally reached $10,000 in one month.

I pulled up my phone camera and started documenting my journey. I thought it was an interesting concept to leave your home country, or even home continent and build a business from anywhere in the world. I started traveling around the world more and my cousin who was at that time studying in London asked me how to get a better job than as a bar back. I told him and he opened a digital service business too. He even got to Forbes after that. My videographer best friend Jonas also thought it’s cool to document this journey and he joined my world travels. We had a blast time travelling and shooting videos together and it was our goal when we were kids. 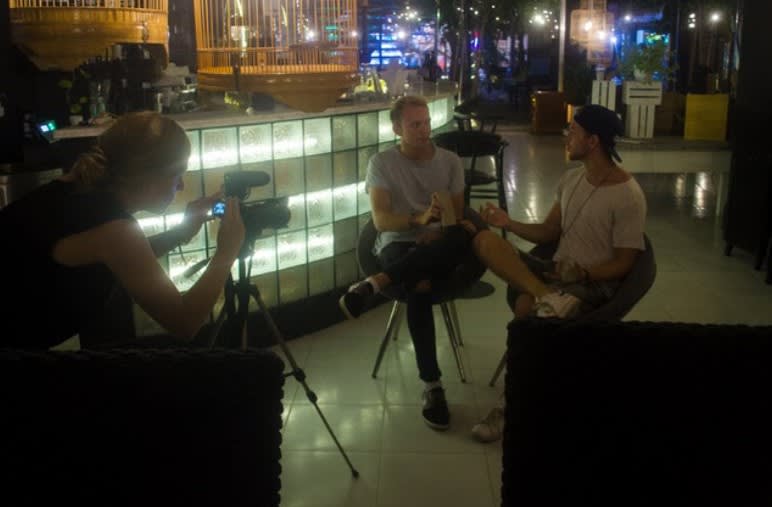 As our popularity on YouTube grew and as more and more friends in my circle got successful replicating this model. For example Jonas later went on to start Germany’ largest explainer video agency with revenue of over half a million euros each month.

I started getting a lot of consulting clients and started liking it way more than managing website sales business. I also loved the aspect of traveling around the world while shooting cool content with my friends.

Over time I started getting more and more consulting clients and at some point I’ve realized that I can no longer teach all of them myself. My expertise is limited so I thought of creating a system of matching entrepreneurs with other more experienced entrepreneurs who can teach them specific skills.

When I say specific, I mean exactly how to get leads through different funnels, how to close deals and manage your operations. None of the vague Masterclass or online gurus fluff. I thought the world needs actionable, specific advice for digital service providers. This is how TribalMastermind.com has been created.

At the beginning Tribal Mastermind was more of a group of people who want to travel and be independent. That’s why we organized a lot of events for our members in location like Bali. Our vibe was “digital nomadism”. 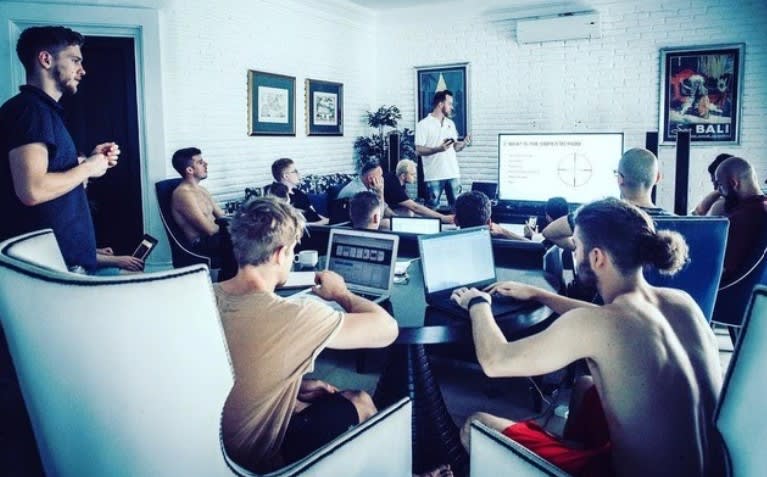 With the time, we opened an office and started gaining more and more established small companies running a digital service offer rather than individual freelancers/beginner entrepreneurs as our clients. Until July 2021 we’ve helped establish over 300 digital service business across more than 30 countries and our new clients are approaching us for the new quality standard in this emerging sector. The unique value we provide is we research all our customers results and exchange little-known industry specific information. 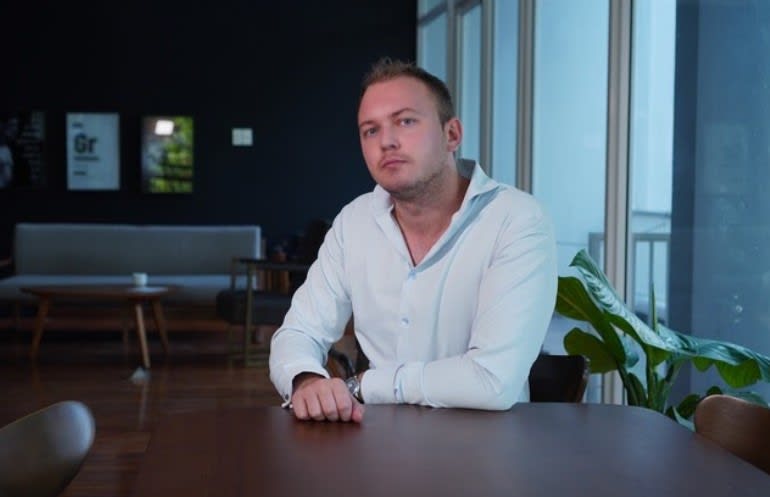