When was the last time you have checked out the "goLance Getting Recognized" section?

Well, there have been some recent updates. Actually, quite a few that goLance had to put an extra row on its home page for all new awards and featured article links.

When I joined goLance, the Getting Recognized section had a handful of mentions. Now, we have two rows with almost a dozen prestigious featured articles and awards. Yes, I'm biased. And yes, I'm impressed.

Here's it how it looks now.

The latest "trophy" among goLance's recognitions is a featured article in the Entrepreneur Magazine. Oh boy, I'm talking about a journalistic beauty with an eye-catching title you simply can't ignore:

The title says it all about remote work, doesn't it? But, according to the CEO of goLance - Michael Brooks, there's more to it. Michael has quite a reputation when it comes to one-liners that immediately become popular and widely used quotes in the world of remote workers.

What he actually had on his mind was this line about goLance:

And, who can possibly forget, now a legendary line that still echoes after the impressive Ripple Swell event took place in November 2019:

We can put a man on the moon, find water on Mars, but I can't do a wire on a Sunday.

It's no wonder this quote set social media on fire, especially Twitter: 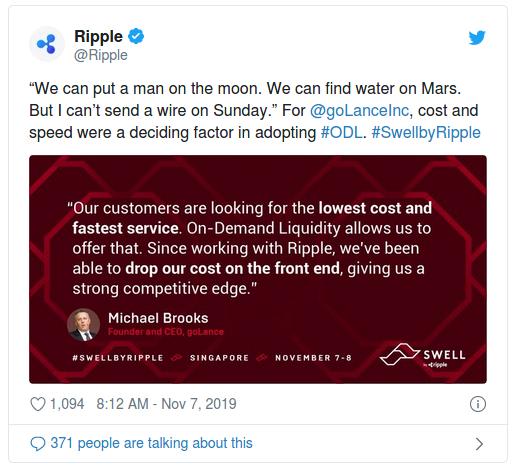 There's more than one line in the Entrepreneur's article about goLance that will become a very popular Michael's quote, but I will point out this one for this occasion:

“It’s really exciting to see how we are able to help people worldwide find work that helps raise their standard of living while giving them the freedom to do this from any location,” he says. “I chose to run my entire business using freelancers, and trusting people around the world with our technology was one of the most exciting things I’ve ever done.”

And, that's not all remote work folks. Michael Brooks was kind and patient enough to provide answers to twenty questions about goLance, his business philosophy, and remote work culture.

Here's my word of advice. Keep an eye on the "goLance Getting Recognized" home page section because more featured articles and prestigious awards are coming this way as we speak.

What a time to be a part of goLance remote work culture and freelance history. Indeed!