Buckle up, because this article takes you on a bumpy ride!

Let’s begin with a simple and innocent question. Where to look for freelancers? I’m talking about geography and locations in general, not about particular freelance platforms.

You have probably seen it so many times in the movies or on TV. Some of us did it ourselves. It works like this. Spin a globe, close your eyes, and use your finger to stop it and choose a random location. Here’s the thing about freelancing.

You aren’t going to make a mistake. Freelancers are scattered all over the world. You will find so many of them in any country you pick.

That was easy and fun. Now, here comes the tricky part. Let’s say you want to ask a different kind of question. Where do the best freelance developers in the world come from? What country has the best designers? How about translators? Don’t forget the freelance writers.

We are on a slippery slope toward stereotypes, prejudices, and bias. So, what should we do? While I was doing my research for this article, I realized something important.

The only way to delve deeper into this topic and not hurt anyone’s feelings about it is to let the numbers do all the talking.

The Numbers Always Tell The Truth

You don’t have to be an expert in analytics to make the right guess about the top five or ten countries in the world when it comes to freelancers. Hey, it’s not rocket science. I dare to say; it’s common knowledge.

Here is how it looks like when the professionals roll up their sleeves and do their analytics homework. 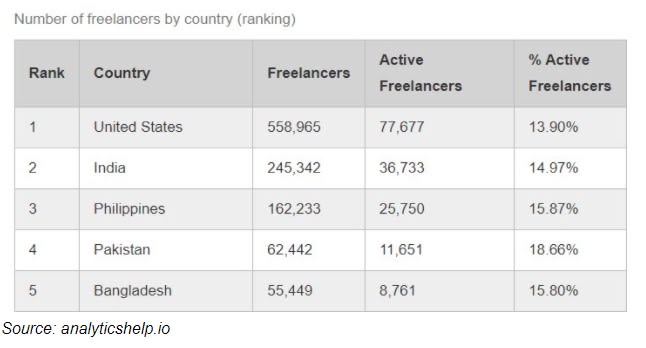 But, let’s look at these numbers from a different angle. Global Internet Freelance Market Overview for 2018 did a remarkable job of analyzing the “density” of freelancers per country. The findings are both surprising and interesting:

Is this the best we can do? Can we dig even deeper and be more specific about freelancers’ skills and locations? It turns out that we can.

I stumbled upon this great piece on Medium: GLOBAL FREELANCER SKILLS INDEX(based on LinkedIn Data). The author is Alper SASMAZ, who put a great deal of effort into his research. Here’s a quote where the author himself explains what he wanted to achieve with his study and how he did it:

“The general purpose of this study is to measure the number of skilled people per million population in 65 countries over professionals with global freelancing capacity and competence. In this way, it is possible to make basic inferences about the potential of these countries to work remotely and to give policymakers an idea of emerging and growing digital skills.”

The screenshots to follow are the results. Scroll down a little bit. I assure you, it’s going to be worth your time. 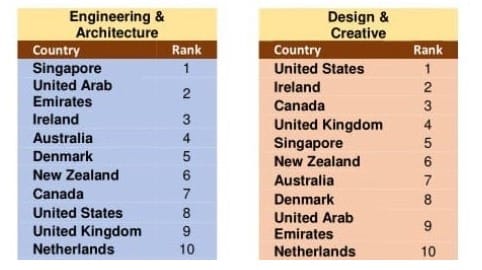 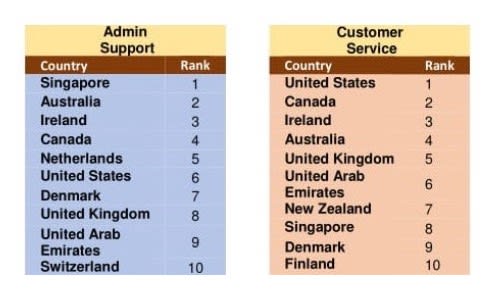 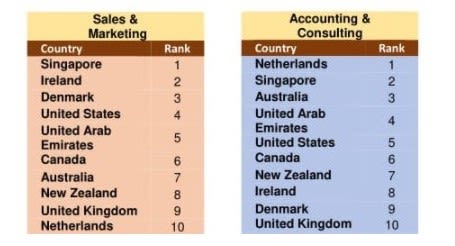 The results aren’t exactly what you expected, are they? That’s true. However, you should keep in mind that the author used LinkedIn data only. All things considered, the tables you just saw are great.

It is in our nature never to be satisfied with what we got and always look for more, isn’t it? So, I moved on, driven by my curiosity to try to get to the bottom of a mysterious link between freelancers’ specialties and their locations.

The Most Famous Freelance Skill Destinations: Between Urban Myths and Business Reality

The Oxford Internet Institute (OII) has published a report: Where are online workers located? The international division of digital gig work by the author - Vili Lehdonvirta. It would be unfair and disrespectful to say that this important research eventually comes down to one chart. However, the one you are about to see is worth a thousand words. 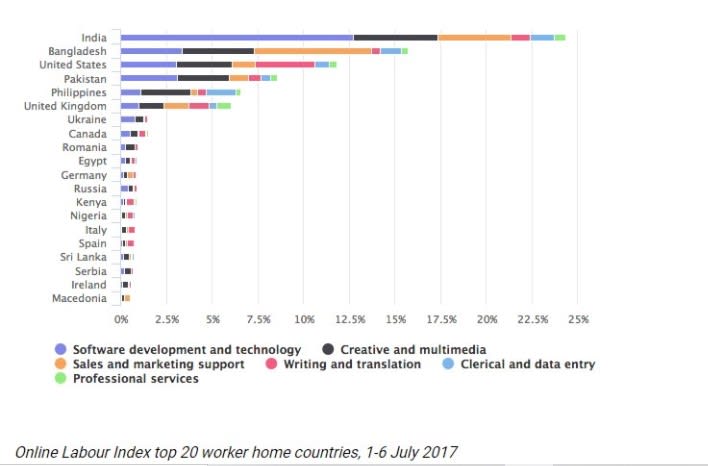 It is no wonder that the findings of this research caught the attention of one of the “Countries Today” website’s writers:

Freelancers can work anywhere at any time, and the hiring bodies only have to find the people with the matching skill sets and expertise. It is wise to look for freelancers in the countries which are famous for particular freelancing skills. For example, India is the world’s biggest software solution exporters and freelancers. Likewise, the USA is known for its translation and content writing skills.

The title of the article is Where Live Freelancers? And In Which Field They Love To Work. Here are the brief versions of the most interesting conclusions based on the Oxford Internet Institute’s research I mentioned earlier. Just a heads up, you aren’t going to get a list of locations with a single most popular freelance skill per country. Instead, you are more likely to get a couple of skills that freelancers from a certain country are very popular for.

I highlighted the skills and locations so that you can get a quick overview. Again, if you want to read the full version of the article, you can find it here. And, if you want to interpret the findings of the OII research in your own way, feel free to do so by using this link.

There are no winners and losers in the freelance industry, and my article is not a popularity contest. However, we can’t ignore the facts that some countries have a higher number or percentage of freelancers who specialize in certain skills than others. So, here we go:

In case, you have been wondering, just like I did, where are the freelancers from Romania, here’s the answer:

“Freelancing was among a top preference of youth until the last three years. The taxes on freelancers was imposed which was under the debate of being equal to income tax on regular jobs. The tax charges on freelancers in Romania differ a lot than any other country.”

The Oxford Internet Institute research came up with this useful map of Europe based on the prevailing freelance skills. So, have a look at it: 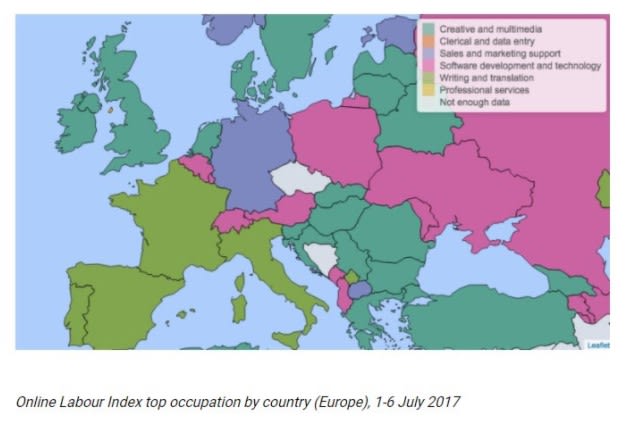 Let’s face it. You could make quite a few solid guesses even without reading this article. For example, for me personally, the Philippines has always been a synonym for customer support freelance jobs, Ukraine for software remote work, India for data jobs, Romania for freelance designers, etc. Every person, a potential client, or a freelancer who is already a part of the freelance industry has their own idea about countries that are the synonyms for particular freelance skills in terms of popularity and quality of work. There’s nothing wrong with it.

The problem occurs when these ideas cross a thin line between bias and prejudice, on the one hand, and the statistics that are backed up by the thorough research results. So, what should you do?

Well, hiring without prejudices is always a safe bet. Treat the whole world as one big country without borders where freelancers live and work. Find the most suitable balance between talent and your available budget. The most important thing is to simply ignore the flag next to your freelancer’s picture.

Because, the only rule is that there are no rules when it comes to freelancers, skills, and locations. Small countries can turn out to be a big surprise. Take my home country - Serbia - as an example. Yeah, I’m a bit biased here, but who can blame me? Right?

What is the first thing that comes to mind when you mention Serbia? Yes, tennis and Novak Djokovic. Let’s not forget the NBA MVP winner - Nikola Jokic. Did you know that the Euroleague’s MVP also comes from Serbia? Finally, I knew that my country has quite a few freelancers, but I didn’t have a clue that we have the highest “density” of freelancers in the world. This is something I discovered while doing research for this article. I’m not bragging, but rather just stating the obvious. To be quite honest, the last number related to the average percentage of freelancers per 1,000 says a lot more about my country’s economy than the skills of my fellow freelancers, unfortunately.

So, Bon Voyage, and happy hiring or working! Remember my advice from the beginning of this article about using your finger to stop a spinning globe at a particular location (country)? That’s the beauty of freelancing. Do it, and you won’t regret it. I’m just curious. How long would it take you to find my home country on a globe? Take your time, and be honest. I won’t take it personally. That’s not a promise.